Brno. The best city in the heart of Europe to live in.

Brno was elected by Timeout.com among the best 16 cities in Europe to visit in 2022.

Brno, lying between the Bohemian-Moravian forested highlands and the fertile South Moravian lowlands with vineyards, offers its residents and visitors a high-quality and attractive natural environment for living, business and recreation. The city is a unique cultural centre of the whole region. There are permanent theatre ensembles, opera, ballet and musical stages, a philharmonic orchestra, and you can also visit a number of museums, galleries and libraries, a recently modernized observatory and planetarium, a zoo and a botanical garden. More than 20 festivals of culture and theatre take place in the city each year.
Brno is remarkable for its unique functionalist architecture including an icons of functionalism -Villa Tugendhat, which is inscribed on the UNESCO World Heritage List. Modern architecture in the city is mapped by the project of Brno Architectural Manual. Dominating historical features of the city are the fortress of Špilberk castle and the Cathedral of Sts. Peter and Paul. The unique medieval Ossuary under the St. James Church is a new tourist attraction, as well as a complex of underground corridors and cellars running underneath the whole downtown.
Brno is also an important centre for team sports, namely hockey, football, basketball, volleyball and others. Brno citizens can use a wide range of cycling trails, sports and fitness centres, indoor and outdoor swimming pools, multipurpose halls and playgrounds, gym halls, ice rinks and the Brno lake. Each year, the Brno Racing Circuit hosts the World Road Bike Championship, MotoGP of the Czech Republic. 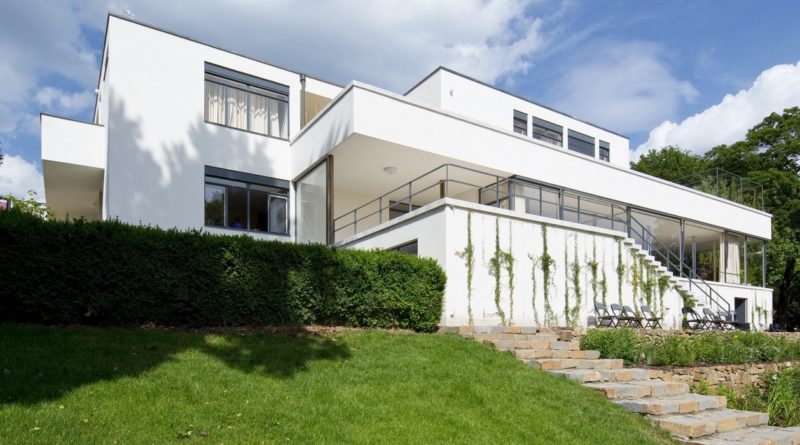 The Tugendhat family home was built according to the design of the architect Ludwig Mies van der Rohe and his collaborators in 1929–1930. The uniqueness of the Brno villa lies not only in its formal architectural purity, siting in natural surroundings, and its interconnection of rooms, but also in its technical and structural design and use of fine materials. It has become Brno’s icon of modernist housing and occupies a prominent position globally and within the oeuvre of its architect. Therefore Villa Tugendhat is the only example of modern architecture in the Czech Republic inscribed in the list of UNESCO World Cultural Heritage sites.

Find out more about Villa Tugendhat


Cathedral of Sts. Peter and Paul 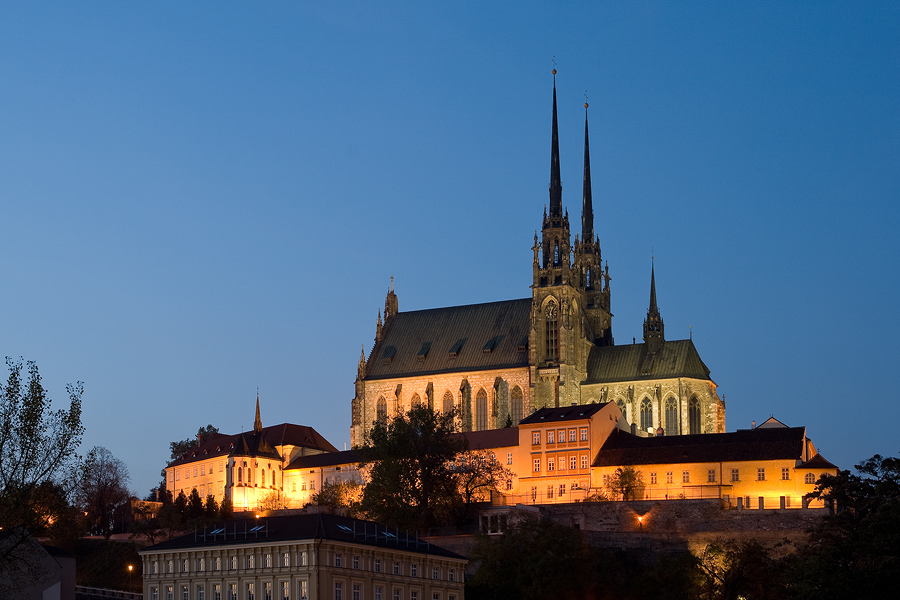 The cathedral – nicknamed Petrov, like the hill – dates back to the 11th and 12th centuries, when a Romanesque chapel was built on the top of a hill. At the end of the 12th century, a small church with an apse and a crypt was built there, and in the 13th century it was expanded into a Romanesque basilica, the remains of which were discovered during an archaeological study of the cathedral at the end of the 20th century; the site is now open to the public. The church was then rebuilt in the early Gothic style and made a provost church and a collegiate chapter. The artist behind the 18th-century Baroque interior was architect Mořic Grimm. The current main altar was created at the end of the 19th century. The ‘Kapistránka’ pulpit located on the left side of the hall is a remarkable piece of art; it is named after the Franciscan friar St John of Capistrano, who preached in Brno in the second half of 1451. The bells on the cathedral towers ring at 11 am instead of at noon in remembrance of a legendary trick that Jean-Louis Raduit de Souches played on the Swedish army as it lay siege to Brno. As the story goes, Swedish general Torstenson claimed he would abandon the siege if his army failed to conquer the city before the bells started to ring at noon. For this reason, de Souches decided to have the bells ring one hour earlier. 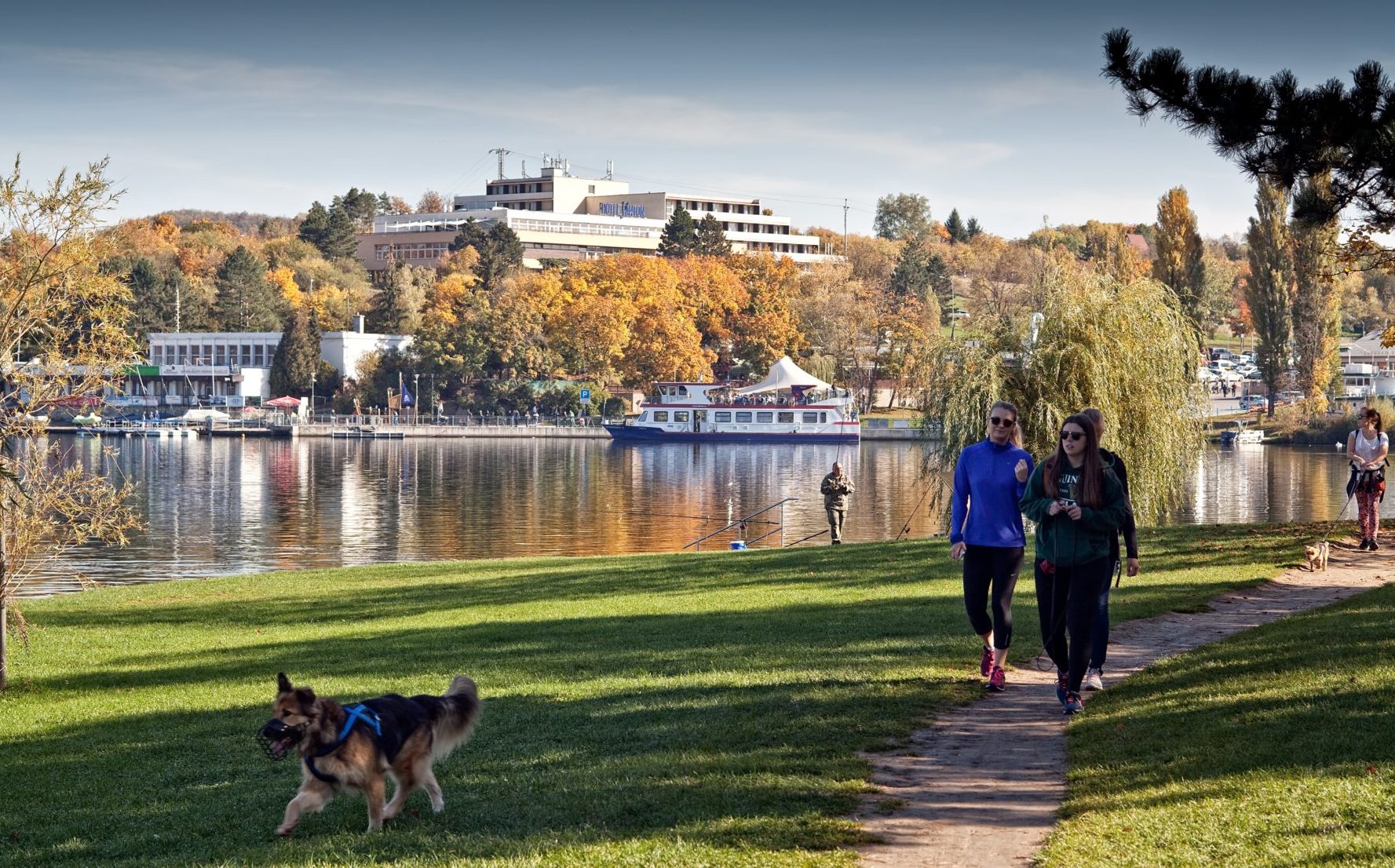 The Brno Reservoir, previously known as the Kníničky Reservoir (Czech: Brněnská přehrada, also known as Prýgl in Hantec slang) is a reservoir on the Svratka River at the northwest edge of the city of Brno, Czech Republic. The construction of a dam on the 56th kilometre of the Svratka River, and the resultant flooding of the river valley containing the village of Kníničky, created the reservoir. The reservoir used to serve as a water reserve for Brno (water from the Vír Reservoir and from wells in Březová nad Svitavou are used today). It remains a place for recreation, and also a source of electric power. The administrator of the Brno Reservoir is the state-owned enterprise Povodí Moravy, s.p. 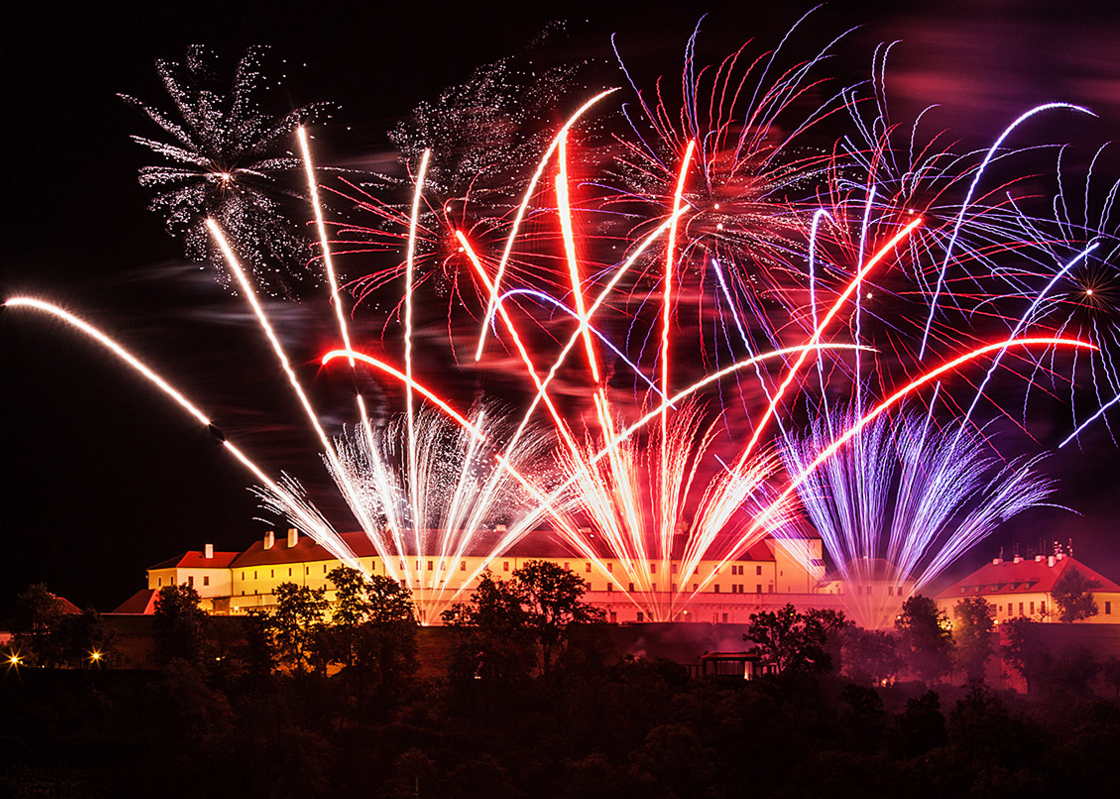 The Ignis Brunensis is an international firework competition held annually at the end of May and beginning of June in Brno, Czech Republic. The name of competition is Latin for Fire of Brno.The event lasts about two weeks and involves the whole city of Brno. It is introduced by non-competitive fireworks launched from the city centre. From this moment competing fireworks are presented outside the city centre on the nearby Brno Dam where the effect is increased by reflection from the water. Each fireworks show lasts about 22 minutes, with synchronized music broadcast by the local radio station.