Main feature of the week

This week our main feature is dedicated to the traditional apple pie.
Let's read what FOOD52 says about the origins of this glorious recipe! 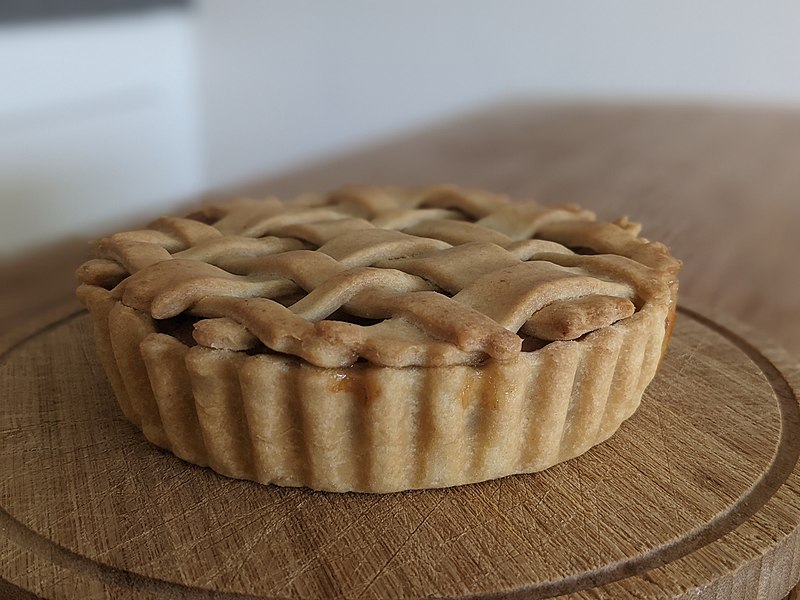 An example of a delicious, traditional apple pie. Here's a good recipe!

The History Of Apple Pie
Rather than the good old US-of-A, apple pie as we know it first originated in England, where it developed from culinary influences from France, the Netherlands, and even the Ottoman Empire. In fact, apple trees weren’t even native to North America until the Europeans arrived. Only crab apples grew on the continent; shrunken and sour, they were barely used for eating, let alone for pastry.

Indeed, many of the other ingredients necessary for apple pie also come from beyond America’s borders. Wheat originated in the Middle East, while pastry fats like lard and butter arrived when Christopher Columbus brought domesticated pigs and cattle to the New World. Crucial spices like cinnamon and nutmeg, meanwhile, came from far-flung countries like Sri Lanka and Indonesia. And of course, the art of pastry stemmed from a melting pot of culinary traditions in mainland Europe, particularly French, Italian, and Arabic. As for the dish itself, the British and Dutch made their own versions of apple pie long before the Declaration of Independence or even the first Thanksgiving. Though most British pies were savory, apple and other fruit-based pies were common dishes, and one of the first recipes for apple pie appeared in England as early as the 14th century in The Forme of Cury by Samuel Pegge.

So how did apple pie, a dish eaten centuries before America’s first president was even born, become an enduring patriotic symbol?

The First Apple Pie Recipes Eventually, European settlers brought the dish to the colonies, where they used the domesticated apples they had introduced to the continent to make pies. The dish quickly caught on. Not one but two recipes for apple pie appeared in America’s first cookbook, American Cookery by Amelia Simmons, published in 1796. From the colonial period, the dish endured during the 19th century and through the Civil War. John T. Edge shares in Apple Pie: An American Story that even in wartime “both Union and Confederate troops scavenged for apples and commandeered the hearths—and flour bins—of white farmers and black tenants to bake pies.”

An easy, affordable, and adaptable dish, apple pie went on to become a staple in American cuisine throughout the 18th and 19th centuries. However, it didn’t become part of the cultural lexicon until around the 20th century, when such influential factors as advertising, news, and war created a new, misleading narrative that transformed the dish into a nationalist symbol.

One of the earliest examples of this shift can be traced back to 1902, when a New York Times editorial argued for the dish’s national importance by asserting that pie had become “the American synonym for prosperity.” “Pie is the food of the heroic,” it declared. “No pie-eating people can be permanently vanquished.” The dish was also positioned as unique to the United States when The New York Times published a 1926 article with the headline “The Tourist Apple Pie Hunt Is Ended: American Army Abroad Has Failed Again to Find in Europe ‘the Kind They Make at Home.’”